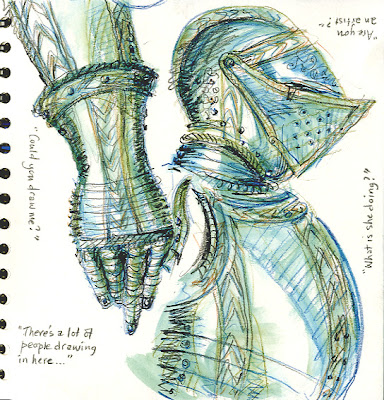 John and I got up early on Saturday and took our trusty 22 bus to Sheffield Station, where we met up with a small band of fellow sketchers, ready for SketchCrawl North's February SketchCrawl. I warmed up on the way: 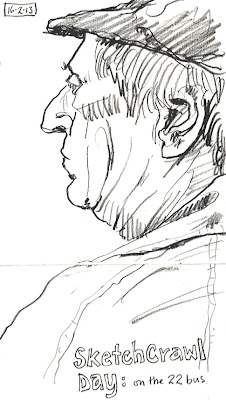 Part way to Leeds, Suzie, a first-time 'crawler, jumped on the train to join us, then several more met us at the Royal Armouries, until we were eventually about 18 strong, including another couple of newbies (welcome guys) and our 3 regular, younger members: Josh, Tom and Harry. 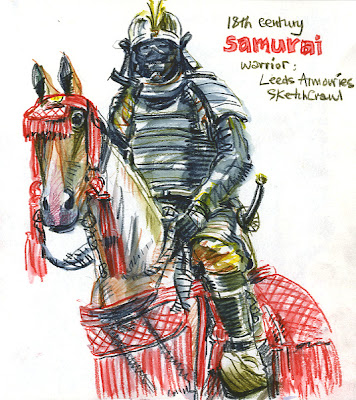 If you have never been, the Royal Armouries is a fantastic museum which I would highly recommend: full of beautiful and fascinating stuff to draw, as well as talks and re-enactments all day long (and it's free!). 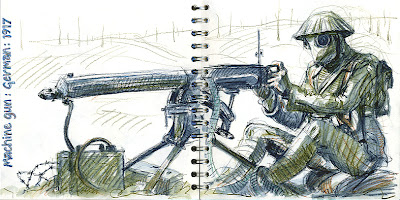 Saturday was a gorgeous, sunny day and the museum towers above the Leeds canal, with full-length windows on all floors, so the views were pretty enticing too and several sketchers had a go. I was tempted, but stuck with the exhibits in the end. It's really easy to lose half your sketching time in indecision, especially in a museum, where there's so much to choose from, so I try to just go for it, with the first thing that draws my attention. 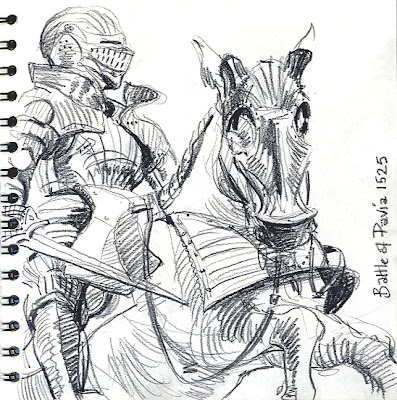 At lunchtime there was a Wild West, gun-slinging re-enactment outside, so we braved the cold to watch.

Unfortunately, there was a bit of a crowd, so I couldn't see or hear much of the action (although the gun-shots must have been heard across Leeds!), but by climbing up on a seat, I was able to see over people's heads sufficiently to sketch some of the re-enactment team on the outskirts: 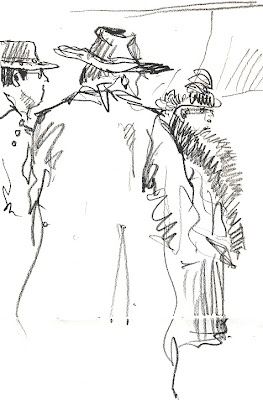 Then we had a spot of lunch together in the cafe, to warm up. After some soup and a blueberry muffin, I went back into the Oriental gallery to finish off this armoured war elephant I'd not quite got done before lunch. Almost everyone drew this elephant. It was the equivalent of the woolly rhino that we all fell in love with at the Weston Park Museum SketchCrawl. At the end of the day, we went back to the cafe for the sharing of sketchbooks. We popped them all on the tables and then passed them round and had a good nosy (I love looking in other people's sketchbooks!). As usual, there was some really inspiring stuff (you will be able to see some of it on SketchCrawl North's Facebook group, as people add their work) and everybody tackled things in their own way. Best of all, the newcomers all agreed that they had enjoyed themselves enormously and would come again! 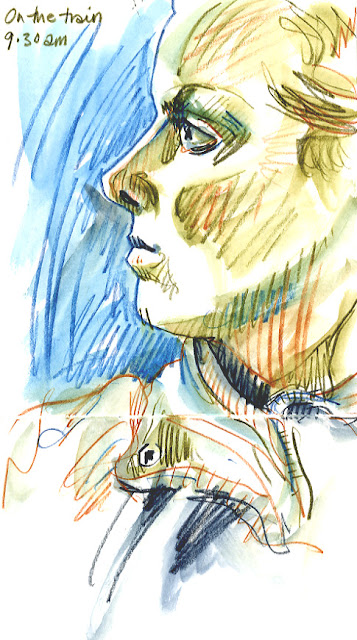 This was a train sketch I did on the way - on the way home I was too tired!

If you are in our region and would like to join in on a SketchCrawl, please email me and I'll add you to the e-mailing list. It's all free and open to everybody: any age, any level of ability. It's about having fun together, sharing a love of sketching.

That museum sounds (and looks) like a whole lot of fun! That suit of armour and the elephant are sensational!
Lynne, I love your train people and your line work is so clean and assured...I wanted to ask you...hope this doesn't sound like a silly question..., I was wondering if, on your people's faces, do you always start your drawing with the profile?...or is it the eyes or hair?.....and.... do you keep your pencils very sharp!?

Thanks Ethna. Yes, I carry a slim craft knife to make sure they stay very sharp.

Where I start depends on what view I have, but it's usually the outline if it's a profile and probably one of the eyes or the hair-line if not, I think....

Looks like it was a great day Lynne, sorry I missed this, but I had work to do and wanted to make the exhibition at the Sculpture Park, which was about to finish. You managed to do lots of work, it looks great!

Oh My – that elephant, there is a whole story there (Though more steam-punk than picture book)