I promised to give you the details of the workshops I took at the Urban Sketcher's Symposium recently, in the fabulous setting of Santo Domingo, so here is the first one...

I took Nina Johansson's workshop last year in Lisbon and so knew it would be good this time too. This year, she challenged us to use unfamiliar and restrictive tools to make us draw in new ways. She was so generous and let us play with the various media in her kit, but wouldn't let us use anything 'easy'! 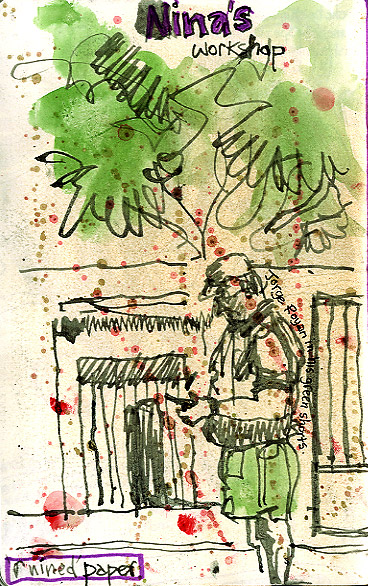 The first thing we did though was to 'ruin' the paper of our neighbour, by splashing paint, walking on it, rubbing it in the dirt or anything else we could think of. The idea was to get rid of the intimidating white paper, so we were less precious about what we sketched. I did some printing off the pattern of a car tyre for my partner; she got into spashing paint around. Then I drew fellow-sketcher Jorge Royan onto my ruined page, using Nina's bamboo pen and diluted ink. 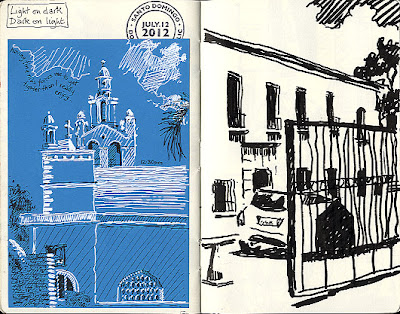 The images above were hard for me. Nina made us draw on coloured paper with just a white gel pen and a black pen, which challenged us to create tonal values very differently. The 2nd drawing was done with a fat felt pen, so detail was difficult to achieve and everything had to be reduced to either black or white. 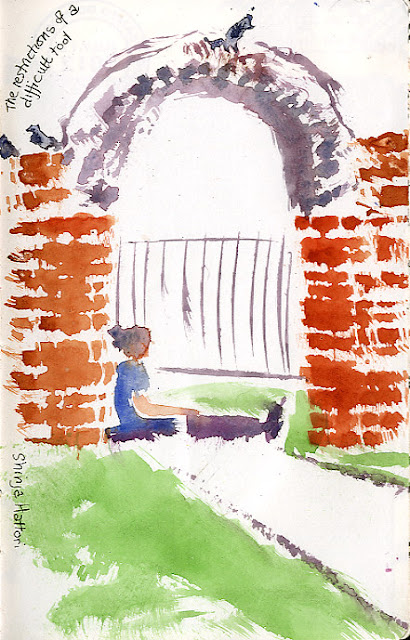 Nina wouldn't let us paint unless we used impossible brushes! The one above was done entirely with something not unlike a pastry brush: very wide and bristly. Luckily it was just right for describing the ancient brickwork around the arch and using it edgeways, I could manage the railings. Getting the figure right was tricky though and the pigeons on top got splatted when I closed my sketchbook too soon. 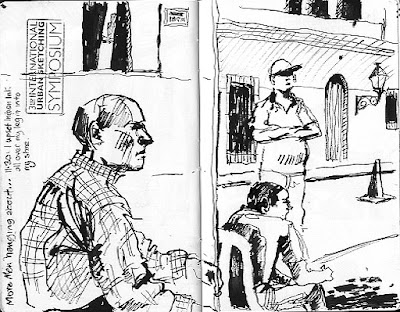 I have been wanting to try out a bamboo pen for a while, so got very excited with this one (and the one at the top), which may be why I upset the black ink bottle I had balanced on a rubbish bin, and ended up with ink all down my leg and into my shoe. Worth it though. I have bamboo in my garden at home, so am determined to try and make a pen. 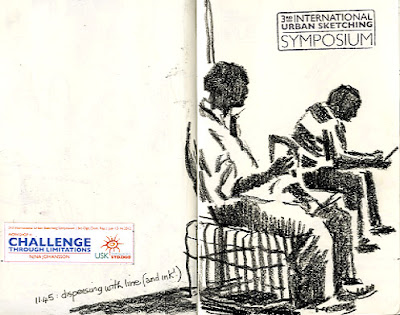 I went for something safer next: a fat, wax crayon. It forced me to simplify, since it was impossible to draw detail again and I had to describe the figures by using the strong light on their clothes. 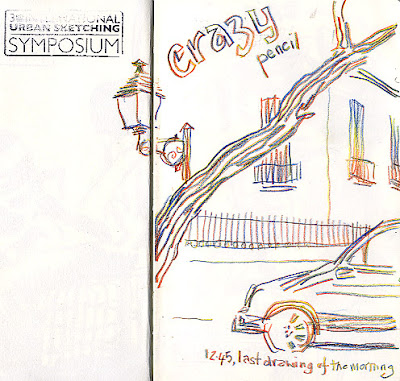 I left Nina's chunky 'rainbow pencil' until last, as I thought it was a bit like something a child would use, but actually, once I started to draw, I discovered it was wonderfully smooth to use and the marks were great. Again, it made me control my lines in a new way and was too fat for fiddling about, so the result is unlike anything else I did while I was at the symposium.

If you enjoyed this, try another of the symposium workshops: 'Colour Games'.  You can now see all the other sketches I did during my trip in the Dominican Republic sketchbook on my website.

Thanks for sharing this... sounds like a fun workshop and symposium. Wish I could have gone.

You're welcome. I'm hoping that it will give folks enough info to try some things at home. Good luck!