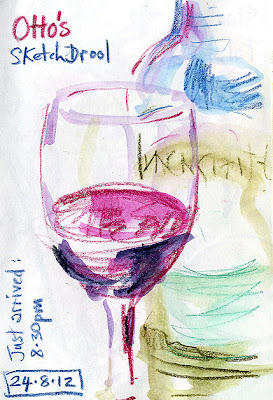 Yes, following on from the regular SketchCrawl, then our SketchJam idea, we SketchCrawl North sketchers have coined another new term: the SketchDrool. It combines two of my favourite pastimes - drawing and eating!

Last Friday night, despite unbelievably torrential rain, a small group of us met up to go to the preview of a new exhibition of screen prints by Mick Marsten, at Pete McKee's A Month of Sundays gallery in Sheffield.

It was really nice stuff. We thought that the foul weather might put people off though, but the show was packed. It was nice to bump into several people we knew and chew the fat over a glass of wine and some nibbly things.


Afterwards, we crossed the road to Otto's restaurant, where we had booked a table for a drawing evening. I took along my Inktense watercolour pencils, my trusty waterbrush and just a tiny A6 sketchbook. I managed to grab one sketch for each section of the meal. 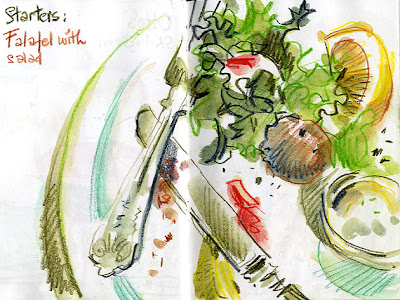 Serious food-sketchers, like sketch-buddy Matthew Midgley, did their drawings before they ate, but I couldn't resist getting stuck in while it was hot, and only stopped to draw half way through.
As soon as my main course arrived, I realised that mushroom risotto was not the wisest choice... 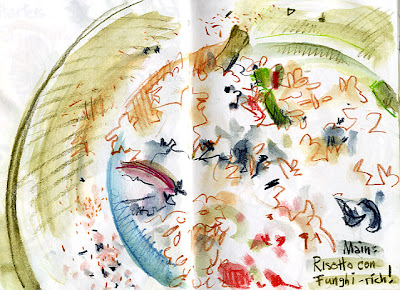 It tasted delicious but was mainly white, not to mention consisting primarily of impossible-to-draw rice! I was happy to stop and sketch though, as it was very rich and I was getting seriously stuffed.
While we waited for our food to settle, we had some more wine and moved places, so we could chat to new people and have new angles to sketch from. This is Moya, who I met at my clay modelling evenings: 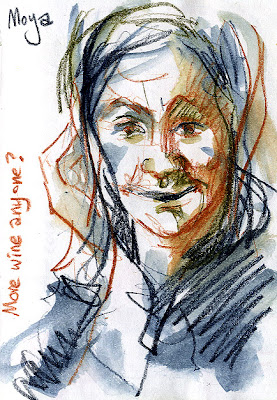 After a bit, the waiter came to try and tempt us with the desert menu but, though puddings might have been fun to sketch, we all groaned and took the sensible option of ordering coffees instead. 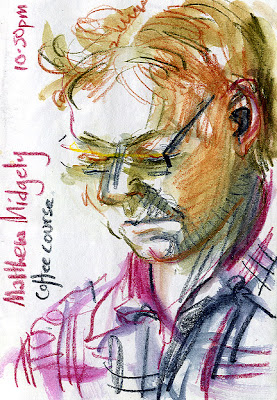 It was great fun to try something a little different and worked especially well for having a combination of stalwarts like myself, Andrea Joseph and Matthew, but also some first-timers. It was a lovely evening and an idea I'm sure we will repeat.

What a great idea... I'm going to try an arrange a SketchDrool in Muscat as it's too hot outside.