Colouring the first spread was a joy: a bold image like that is perfect for pastels. But next I decided to tackle some of the more fiddly bits. Four of these vignettes will appear together on one page: Lucy is trying out being a dog, digging holes, chasing flies, napping... The central image is different. That one comes directly after the first spread I've already coloured. Lucy she is making her doggy disguise: 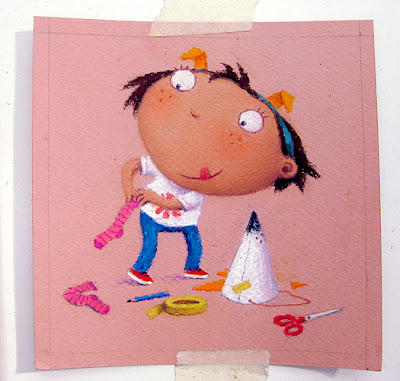 Doing these vignettes early on is my way of getting to know the Lucy character, before I have to illustrate her in more complex images. Fiddly images are a bit of a nightmare in pastels though!

Whenever I have several small images which will either appear in sequence or are very similar in content, I generally try and colour them together, like this. It's quicker and also helps to ensure that colours remain constant. Also, if several vignettes are going to appear on the same spread, I need to design the colours to balance across the page as a whole.

Its really good picture book for little kids i love it because this book picture has good character and kids also like this type of pictures thanks for share it dissertation editing services .