Illustrating a Children's Picture Book: One of 'Those' Phonecalls...

I had a call from my editor today. There have been lots of shakes ups at their end just lately, which always makes it a worrying time for authors...
We did the chit-chat and talked about how the roughs were going, but I could tell she was a bit anxious about telling me something. Authors out there will know the thoughts that whirl through your mind in these circumstances - is the book going to be held back a year? Has there been a major rethink that means starting afresh? Has the new management decided to dump the project altogether..?! 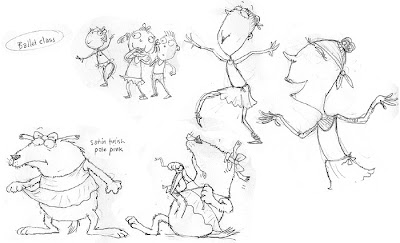 The first thing I had already anticipated: there will be no hardback edition - we're going straight to paperback. It seems this is becoming increasingly standard in these difficult times: all my recent Egmont titles, like A Lark in the Ark and Baby Goes Baaaaa! have been the same, so it's not a major issue. 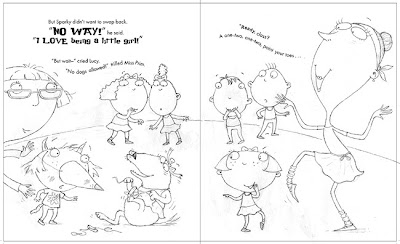 The second thing could have been more tricky: Gullane are standardising their formats and doing away with all the different shapes and sizes for their picture books. Again, I'm not surprised, it makes good financial sense. But the bottom line for me is that, with my drawings only 3 spreads from completion, my page format has changed! 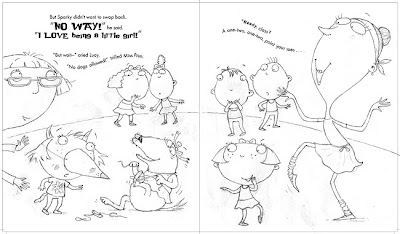 Not ideal. I felt for my editor: it's not her fault, but its's her rubbish job to have to phone round all her illustrators-in-progress. However, I spent the rest of the day re-jigging things in Photoshop to fit the new shape and guess what? It turns out it's much better! Yay!! It's about 10% bigger and just slightly squarer, which has opened up a little more room around the central gutter - always handy. Phew!

I tinkered with each spread as I reworked it to fit too, like the ballet spread above. I know it's subtle (yes, at first glance they look identical) but the extra width, plus little changes to characters' positions and relative scales, make the 2nd version stronger I think. You can see the original character sketches as the top - I haven't changed them much, although Sparky's mood is different as the text has changed since then.
So anyway, in the end today was not too bad at all and I remain very positive. I think my editor was as relieved as me!

I love your children and the teacher! I knew only your children illustrations with animals as characters! I'm really curious to see the book finished! :)

Thank you Gaia. I have done books with mainly people before (eg Class Two at the Zoo and Class Three all at Sea) but you're right, mostly it's animals. It makes a nice change to have some people to play with!

I've got a book in the works with Gullane at the mo too, and received a similar bit of news about just having paperback, so it's interesting to hear it's been the case for your last two titles at Egmont.
And Gullane also seem to be putting a fair bit into ebooks, which could be exciting, so I'm remaining positive too :)

Lucky you could resolve the size issue! Your dog is a hoot!