Illustrating a Picture Book: Getting Started on the Roughs

This week I've started to look at the new book roughs. I'm still doing fairly rough sketches so far, trying to get a feel for how images might work in their allotted spaces. It takes a while to get your brain (and your drawing hand) back into gear, but by the end of the week I should be really up to speed. 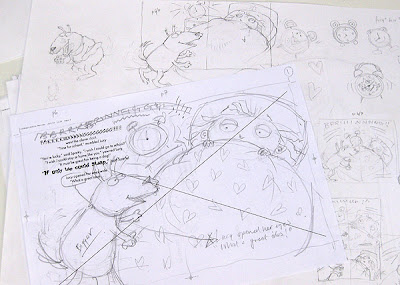 My story is about a little girl, Lucy, and her dog, Sparky. When her alarm goes off, Lucy thinks it's not fair that she has to get up and go to school, while Sparky stays home. Sparky would much rather go to school, as he thinks staying in is boring, so they take the only reasonable course of action... 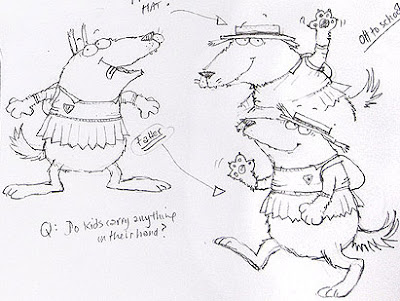 ...they swap places for the day! Sparky (who I decided should be a slightly fat, mongrel with an over-eager attitude to life), squeezes into Lucy's uniform, while she makes herself a doggy disguise. I had so much fun illustrating Sparky in Lucy's uniform. 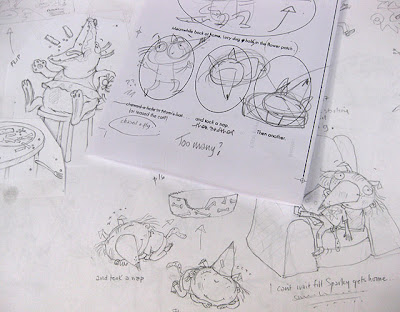 Of course, things don't work out quite as well as they imagine. Lucy starts to find napping at home a bit boring and Sparky creates chaos wherever he goes (although I thought it much funnier if he doesn't realise and just thinks everything is great fun).

The page above, with the ovals, is Gullane's layout suggestion for part of Lucy's day at home. The shapes don't mean circular illustrations, they just indicate that they'd like one half page image at the top and 3 smaller ones below. 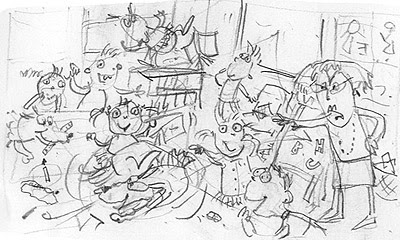 In my original draft, we just saw Sparky in his regular class, but my editor suggested we could have even more fun with school and has asked me to show a couple of other lessons too. Music presents various comic possibilities I've been exploring: 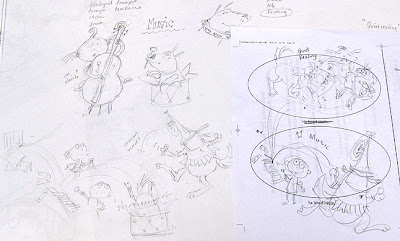 As you can see above right, Gullane's layouts are suggesting two half-page vignette illustrations: one for the music class and one for maths. I can't say maths is inspiring me, so I'm trying alternatives. Art seems a bit obvious, but 'quiet reading' is looking good.
The opposite side of the same page shows lunchtime. I always knew that would be fun to do. This is from my very first sketch sheet: 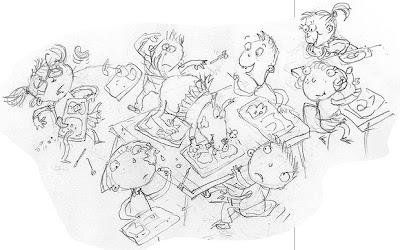 The book doesn't have a proper title yet. It started life as It's Not Fair, which was deemed too negative (fair point), so has had the working title of Dogswap for some time. But that sounds like two people swapping over dogs, so we are still thinking. I've suggested I Want to be a Dog, It's a Dog's Life, The Very Furry little Girl and Dog Day. At the moment my editor is erring towards something simple like Dog Day, but nothing is decided yet.

I explained to our four yr old what your book is about she told me she would call it Dog for a Day. Good luck coming up with your title, it will be fun to follow your progress.

Lynne, you're such an inspiration. Thanks for sharing your process.