I came in Monday afternoon, to find one of those notes from the postman, telling me I'd missed delivery of a package and he had hidden it in my paper recycle-bin.  I wasn't expecting anything, so when I ripped it open, this German edition of Bears on the Stairs took me totally by surprise. 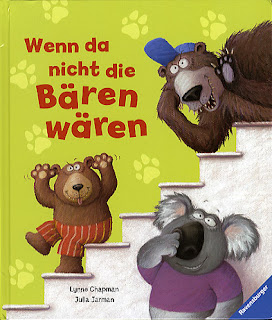 I had completely forgotten that, back in September, my royalty statements showed up that we'd sold a German translation. Since I speak German (well, sort of), I was especially curious to see it, but then, like so many things, it slipped soundlessly from my mind, never to be thought of again. And now here it was!I thought I'd show you, as there are a few interesting differences. Firstly the title: to mimic the fun rhyming of Bears on the Stairs, they have altered the title, and it translates as (forgive me if I'm slightly out): 'if there were not the bears there'.The keen-eyed amongst you will also spot a few visual differences, over-and-above what was strictly necessary for the translation: 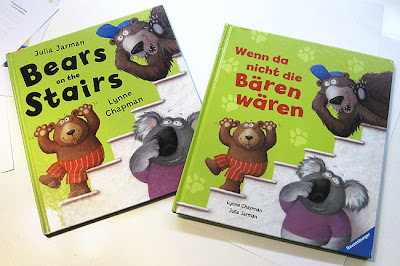 1) The text: the lovely red title will have cost them more than just using the black of the other translated text, but it's much more fun. As German takes up more room, they have moved our names to the handy spot on the stairs.
2) They've added the new idea of paw-prints onto the green (now why didn't I think of that?).
3) The main image is very slightly smaller, so not so much is cropped off, but the bears are slightly less punchy (this is nearer to my original design, which is why there was enough bleed available on my illustrations). They may have done this to create the right shaped space for the names. 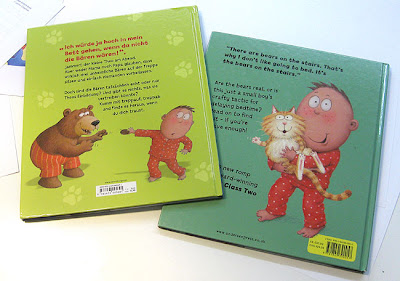 There are even more fundamental differences on the back cover. They've extended the lime as a wrap-around of course, but I have no idea why they decided to lose the original image and substitute the alternative, taken from the inside: 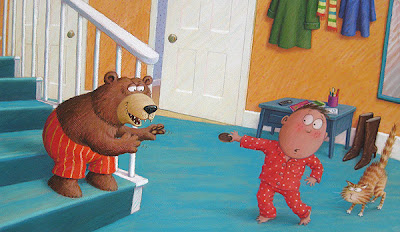 I suppose it's funnier, so maybe their market responds better to 'funny' than it does to 'cute' (cute is pretty much king in the UK).

If anyone is interested in how I illustrated Bears on the Stairs, you can follow it's progress on this blog, from the first little sketchbook character drawings back in June 2009, through all the roughs and pastel artwork that passed over my drawing desk, then on through scan-work, digital text overlays, proofing and final publication and publicity. It all here on the blog, if you look in the archive on the right, and dominates the posts between June and October 2009.

Hi Lynne.
I'm a new follower of this very interesting blog. Your work is amazing.
I'm a little unclear as to if you are annoyed at these changes, I imagine if you were the original designer and you hadn't been informed then that would be pretty disheartening. But it seems pretty amazing to me that your work has spread to other nations.
I'm going to read many more of your posts over the next few weeks. I wrote a book last year and would be keen to find out about your illustrative abilities.
Big hug.
Peaceful Warrior.

Re not running changes past me: they should if they do anything to actually change the illustration (strictly speaking, they probably should have showed me the new back cover image, as it was a vignette cut from a bleed image), but the design and layout is more the responsibility of the Designer at the publisher, so they don't have to tell me in advance about those kind of changes.

I would have been a bit miffed if they had done something that I felt had been detrimental to the impact of the cover, but I think the changes are generally very positive.

Your edition and tools great helped him in education thanks for share it apa formatting generator .