Illustrator Visit: Taking to the Hills (Come Rain or... Rain)

We drove into the wilds of Shropshire last week: another crack of dawn start (groan). It was a beautiful run though and, once again, I watched the sun rise. After 2 hours, we arrived at our goal: Whitchurch CE Infants.

After a nice cup of tea, I waved John goodbye and, while I got stuck into a storytelling with a hall full of 6 year olds, John donned his boots and strode off into the hills. 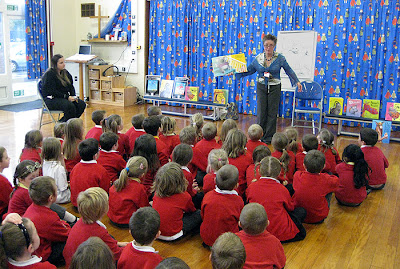 It rained. Boy, how it rained. The school hall had huge windows and I watched the rain beat against them. At lunchtime, tucking into a nice warm school dinner, I texted John: 'How are you doing?'. It came back: 'Wet'. No surprises there. 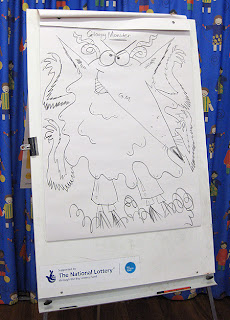 I had a lovely day, as usual. Though I was still hanging on to my cold, my voice pretty much held up. I read 4 different books, sang 3 songs, drew animals of all shapes and sizes, plus one pirate and one 'gloopy monster' (to the kids' design). I gave out badges as prizes and bookmarks as keepsakes and did my Bears on the Stairs chant poem with them.

After school, we sold quite a few books, which always makes me feel loved. As I was signing, John emerged. He was smiling, but he had no socks on - they were a soggy lump in the boot of the car.

By the way: not sure I ever showed you the cute little Bears on the Stairs badges that Andersen Press printed for me. Sweet aren't they? I give them out to the children who play the role of the bear (growling and burping) when I do the chant poem. 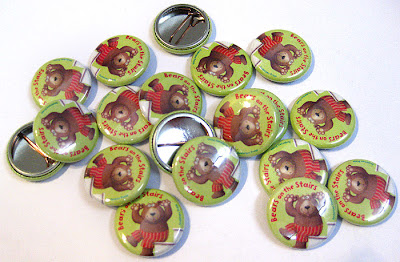 Unfortunately, it took us 4 hours (!!) to get back home to Sheffield: rush-hour (hour??) traffic. Despite that, and John's crinkly toes, we both agreed that we had enjoyed the day. We weren't long out of bed though!

Sounds like a fab day in school, and I love the bear badges. Good job the 4 hour drive was coming home rather than going though!!!