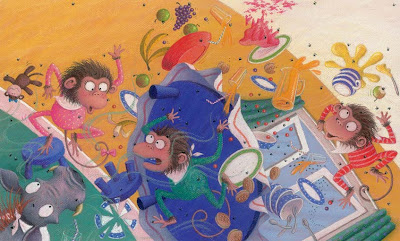 I'm feeling a bit sad that I've spent most of today digitally manipulating illustrations from my books on the computer, instead of playing out in the sunshine. Ah well, such is life. 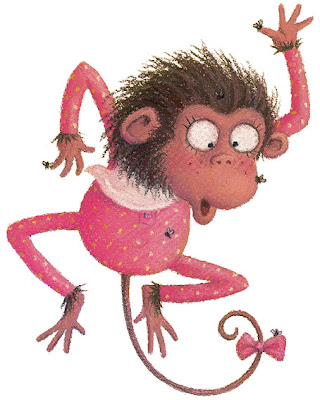 I have been preparing images for the exhibition, for publicity and various 'extra features'.

We are making huge monkey mobiles from the crazy baby monkeys in the above picture, one of my illustrations from Stinky!.

The monkeys were no good as they were, with all the visual clutter in the background. They needed cutting from the picture digitally, and putting on white. 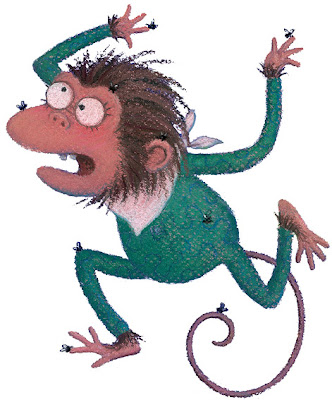 This is slightly trickier than it might be, because they have been drawn in pastels. The pastel texture means you can't just cut round the characters with a straight edge. Which is where the magical world of Photoshop comes to the rescue!

I have a confession: I suspect I'm a bit nerdy with this stuff. I actually quite enjoy the tedious process of doing fiddly jobs on Photoshop. 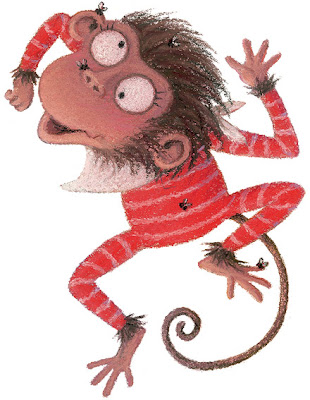 The monkeys were a particularly awkward task, because of the varied and complicated mass of images going on, around and behind them.

I got it sorted in the end though, and it's even worth missing out on today's sun, because I think you'll agree: they're going to look amazing hanging above everyone's heads!

Postscript: you can now see photos of the exhibition in action and read about the launch, or hear about my dinosaur day amongst the exhibits!

They're great indeed--lots of fun. I love the monkeys--even more when they're by themselves. And I am in complete awe of anyone who can do things like that in photoshop. I have no clue.

Thank you Lynne! I am always trying to find new ways of doing things in Photoshop. This post will help me a lot!

That's great Loni - I assume you found the link across to where I did my best to explain the cutting away of the backgrounds?

Well worth the effort indeed! They're a great design and I love the shapes.x

These are the cutest crazy monkeys! I love them as cut-out spots; they have such dynamic and energetic poses. So incredibly well done. I'm so glad I found your blog; I'll be following it from now on.