About a week ago, I had the best day of my residency so far. We were picked up early, by Professor Parker herself, and driven out of the city. At 9am, we pulled up on scrubland, outside a hanger-sized, corrugated metal shed. As I hefted my heavy kit-bag out of the car, a friendly farm dog trotted up and began licking the sun-cream off my knees. 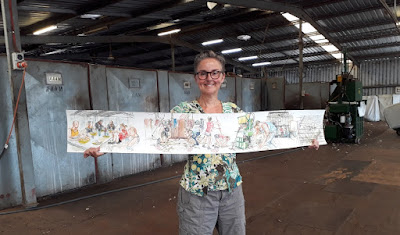 The shed was open-ended. We climbed upstairs onto a wooden deck which stretched right across the inside of the huge building. The pungent, slightly sweet stink of sheep hit me. Despite the high roof, it was hot and muggy too. 'This is cool!' laughed one of the shearers. 'It gets up to 45 degrees in here sometimes.' 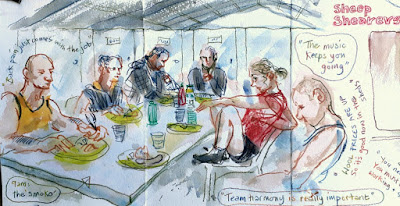 The men had been working since 7am. They stopped for their break just as we arrived. Half a dozen well-built, deeply tanned men in vests and, unexpectedly, two women, were sitting around a table, eating what looked more like a dinner than a breakfast. I grabbed a chair, got out my concertina and began. To my dismay, almost all the men immediately went back to work - they are paid per sheep and time is obviously money!

I followed the men through a door in a wooden fence, which sectioned the deck off from the shearing area. I found myself in a wide corridor running the width of the shed. Pop music blared out above the noise of the electric shearers. Each man had his own station, with a number. He would pull a startled sheep through a saloon-door behind him, grip it between his legs and begin. Zip, zip, zip - the sheep was twisted, re-positioned, held this way and that as he worked. The wool piled up. It was clear that the skill was as much about manipulating and holding the constantly struggling sheep, as about the shearing. 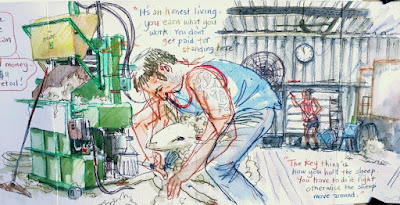 Within 30 - 40 seconds, the sheep was released into another little hatch, which sent him sliding away into the space under the deck. All the while, one of the women would be walking up and down, using a broom-like tool to drag the wool into piles, then gather it up and feed it into a big compressor, to flatten it down. The whole thing felt wonderfully efficient.

I sat on a plastic chair, painting at a similarly crazy pace to the shearers, occasionally bopping around to the music as I worked, occasionally batting away flies. I finished off the concertina by sneaking through one of the saloon doors, to where hundreds of sheep were penned in the bulk of the shed, ready to be grabbed. 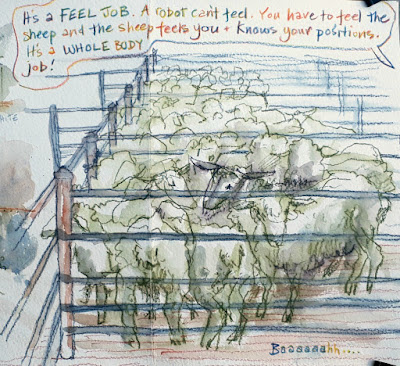 While I was sketching, Professor Parker was finding spare moments to interview various people, to find out what they thought about their work. One of these turned out to be the reigning sheep-shearing champion, from New Zealand, sharpening his clippers at a grindstone on the deck. Where the average is 200 sheep a day (doesn't sound that average to me...), he and his brother once shore a staggering 924 merinos in an 8 hour shift. And merinos, I'm told, are much, much bigger. 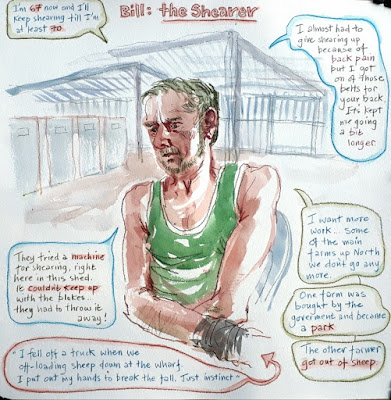 We got a longer interview with Bill: at 67, the oldest shearer there. I did a sketch-portrait of him on a larger sheet, while he was being interviewed. he told us that they tried a new invention in this very shed a few years back - a fully mechanised shearing machine. 'What happened to it?' asked Professor Parker. 'It couldn't keep up with the blokes,' said Bill. 'They had to throw it away.'