I Sold a Painting at Auction! 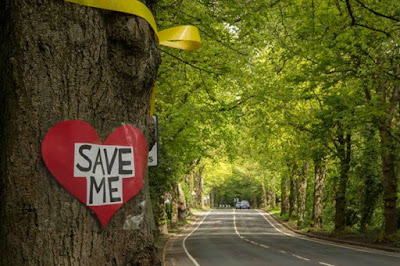 Okay, I'm hoping you have visions of Sotherby's: an oak-panelled room stuffed with very rich collectors and a man with a gavel? Well, no, not quite like that. In fact, not actually like that at all. Hey ho - one day. Mine was a Facebook auction and I was raising money for the tree campaign in Sheffield. 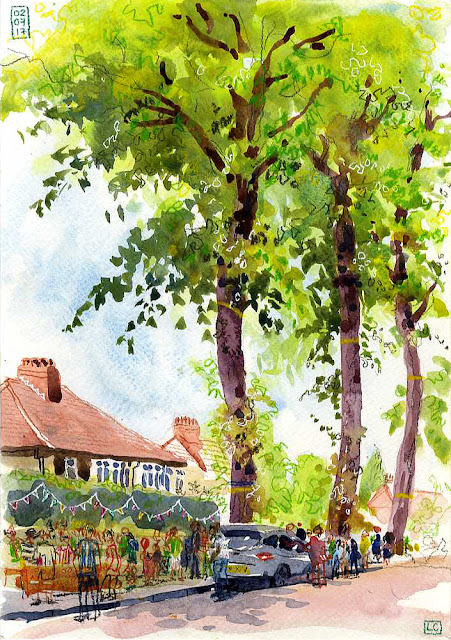 If you don't know about it, there's is a battle going on in my home city of Sheffield, between protesters and the council. They have signed a very ill advised contract with a massive company called Amey, to maintain our streets over the next 25 years. Unfortunately for the poor residents of Sheffield, that involves cutting down thousands and thousands of our beautiful street trees, many of which are 100 years old. Why? Well, they tell us it's because the trees are causing too much damage to pavements and roads, but the damage is ridiculously small - a kerb stone nudged out as little as half an inch for instance. It's actually about MONEY. Of course. It's cheaper to chop them down than to work round them. 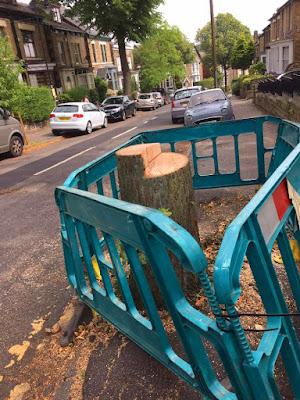 So, people have been fighting. Rushing out and standing under the trees when the cutting crews arrive. The trickiest bit is keeping an eye out, so someone can raise the alarm. We patrol the streets! They chop quite a few before we find out. They have taken thousands already. 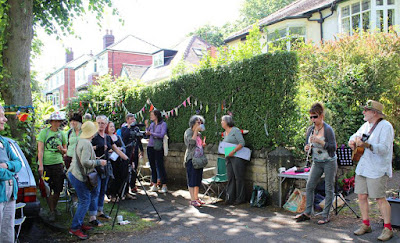 Anyway, we had a small awareness-raising event recently, very close to where I live, to celebrate a glorious avenue of huge lime trees, which the Amey want to destroy. People decorated the trees, sang protest songs, baked cake - you get the idea. I decided to paint the trees, to try and capture the beauty of what we were attempting to save. I squatted on my little stool, in the road, tucked in behind a parked car and got out my watercolours. 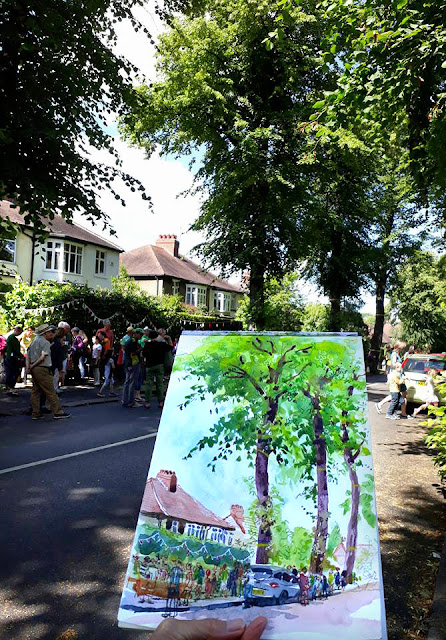 I knew that I wanted to sell the painting in aid of the cause, so I worked on an A4 watercolour block, rather than in a sketchbook. We need money, because the council keep trying to find ways to arrest protesters, so we need to pay barristers to defend ourselves. The last batch of arrests (including 3 old ladies!) was thrown out of court, but they have a new plan and are now handing out injunctions, to stop us standing within barriers they erect around the trees. Thing is, if we don't, they just chop them down immediately! 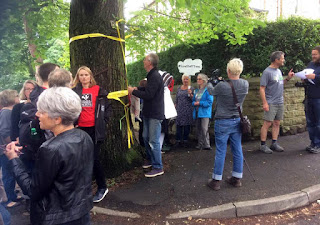 While I was painting, lots of people came to see what I was up to. One very positive side-effect of this horrible business is that neighbours are getting to know one another. We generally have to stand under trees for anything from an hour to 3 hours before the crew finally give up, so it's very chatty. Locals bring us tea, make us toast - it would be lovely if it wasn't so serious. 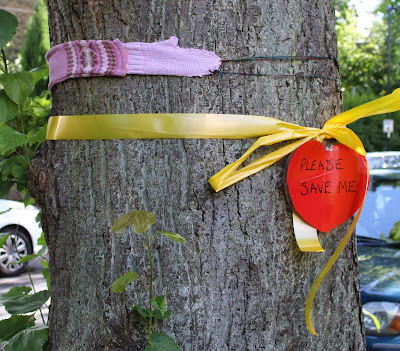 When the event was done, I posted a scan of the painting onto Facebook and announced the auction, with a starting price of £40. It quickly rose to £80, then it stopped for ages, but there was another flurry the next morning. I gave  a cut-off time of midday and by then we had reached £125. Hurrah! 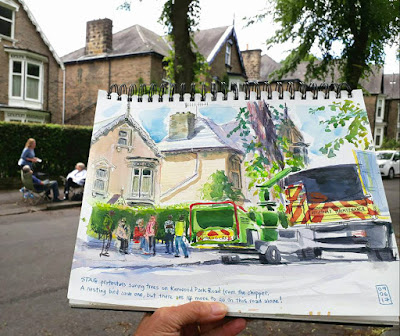 We are also making Fine Art Prints of the painting to sell, plus a local shop has agreed to stock them for us, free of charge, because they too think what the council and Amey are doing is awful. 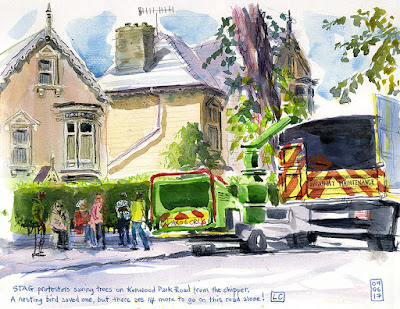 I am doing prints of this painting too, which I captured of the cutting crew, while I was sitting under a tree on a previous occasion. 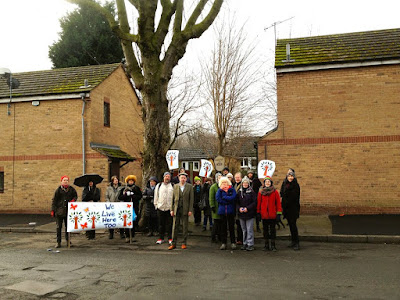 If you would like to buy a print to help us fight the tree-murderers, you have the option of two sizes. The prices are:
A4: £15 (plus P&P)
A3: £25 (plus P&P)
Both are Giclee prints on 300gsm watercolour paper. Please let me know ASAP, so we can pick everything up together when we go to the printers. Orders need to be in by July 17th.

If you want to give money to the fund, or want to find out more about what we will be spending the money on, here's the Crowdfunder page.

Right, better go and get some work done, because any minute the alarm could be raised and I'll be rushing from the house and running to get under a tree before the chainsaws begin. Wish us luck!

Trees being cut down thoughtlessly just breaks my heart. You must feel gutted. Keep up the good fight, Sheffield.

Thank you. Together we are strong (well, stronger anyway)

Here's a tip: You are likely to raise more money if you tell people clearly what the money you are trying to raise will be used for, and even more if you frame it in responsible financial terms like a budget.

Good point. It is going into this fund, for legal expenses incurred by protesters fighting to save the trees:
If anyone wants to give money, this is the link:
https://www.crowdfunder.co.uk/sheffield-street-strees-legal-fund

Nowhere is safe. I saw some of those trees last year. I was on my way to Symposium and visited Sheffield to get my hair done. I thought how lovely they were. It's the same here in Sydney. Chipper choppers mincing trees followed by stump grinders finishing them off altogether. People protest but the pollies don't seem to care. Take paradise put up a parking lot.

Absolutely. But we are putting up a jolly good fight here, especially in Nether Edge where I live. We have organised tree patrols, eye's everywhere ready with emergency call-out numbers. Some of the council's hideous tactics against us are quite probably a sign of how well we are doing :-D

Get your MP Onto it. What does he/she say about it. Tell them they'll be voted out if they don't sort it. Laura