Last Saturday was SketchCrawl Day and we went on a day-trip to Huddersfield: yeh! Only problem: I don't know Huddersfield, so Sam, one of the other members of Urban Sketchers Yorkshire, scouted out some venues and organised the day for me. Even better!

We started of in St Peter's Church, where they were having a Christmas fayre. This was perfect: lots of stalls and colourful goings on to sketch. There were 27 of us, so we might have been in the way, except the vicar let us up into the gallery, which gave brilliant views down over everything. It was a tad daunting though, because it was extremely visually busy. I started with the cake stall. The smells wafting from it as we entered the church were GORGEOUS, but I was very good and resisted. Trouble was, lots of punters didn't resist, so the cakes were disappearing as fast as I could paint them! 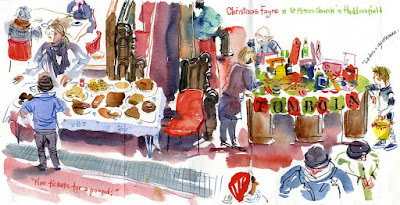 My concertina was great, as I could just follow things along. I was very keen to get the TOMBOLA sign. It was a really cold day, so everyone coming in was bundled up in big coats and warm hats. Despite this, while I was in the warm drawing this soft-toy stall, one or two brave members stayed outside, to paint the church's exterior. Brrrrrrrr.... Sam booked us an area in a local café / bar for lunch, which was lovely, as everyone got to know each other, showing their sketchbooks to their neighbour. Then we were off again, this time to the covered market. It was not an attractive building, so I concentrated on stallholders. I was first drawn to this stall of big, sensible knickers: 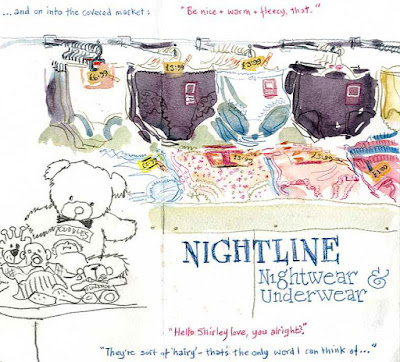 Opposite was a kiosk where a woman was doing alterations to clothes. I loved the sewing machines, with the big cotton reels and there was a handy counter to rest on. I asked if she minded me painting her while she sewed. We had a lovely chat, working away together. It turned out she had an Art & Design background and she was really interested in joining our group. 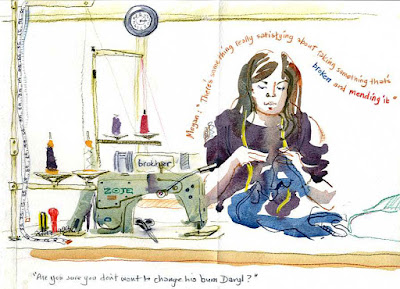 There was a little girl hanging around: the daughter of the woman who ran the nearby nail bar and I got chatting to her too. She was 8 years old and her face was just level with my sketchbook. She watched eagerly as the painting progressed. She was asking lots of questions about my art materials, so I demonstrated how the Inktense pencils worked, explained my waterbrush and travel paintbrush, then gave her a Magic Pencil to experiment with on the back of my spare sketchbook. She was so good, I let her colour in with my Inktense. It was another of those really lovely moments, both of us drawing away side by side, chatting with Megan the seamstress. 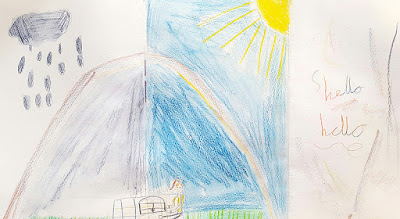 At 3.30, all the group returned to the café for our sharing session and a cuppa. We pushed lots of tables together, as there were so many of us. There was some really fantastic work. A couple of the new members were exceptional too. Really inspiring! Unfortunately, by the time we remembered to take this photo, half the group had left. Still a good pic though: 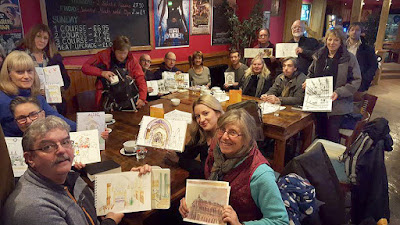 Then it was time for me to dash off for my train home at 5.00. It's a very, very slow train to Sheffield from Huddersfield: as noisy as a cattle truck and it stops everywhere. We didn't mind though - the small group of us going back together chatted away all the way home.

What a lovely day out.

What a fab set of things to draw all day - laughed out loud at the knickers, and also studied how you did things like the falling material the lady was altering. Always good to follow your blog!

Thanks so much Eleanor. It was really good fun in the market. You always get into conversations with the stallholders when you sketch in markets and I love all that.

BTW - the story of the 'hairy' comment at the bottom of the knickers painting:
I overheard it, but was intrigued, as I had my back to the stallholder when she said it. I had to ask her afterwards what on earth she was talking about - hairy knickers??? It turned out to be a shaggy dressing gown, being described for the benefit of a blind customer.

You couldn't make it up!

Both your sketching and your narrative always make me smile (and sometimes giggle) Lynne. You help me remember the 'real English' of my native home Australia, which has not been used after so many years in the USA. Thank you.

Ah yes, we 3 people's who share a common language and yet are quite different. Glad to make you smile and especially glad to make you giggle - there is not enough giggling in the adult world :-D