Layouts: the Designs for my Book Have Arrived!

Last week, my publisher sent another big batch of draft spreads through for my Sketching People book. It's so exciting to see it coming together. It has been a very interesting learning process. It's so different to writing a picture book. Okay, there are an awful lot more words, of course, but that's not really what I mean. It's the process which is new. 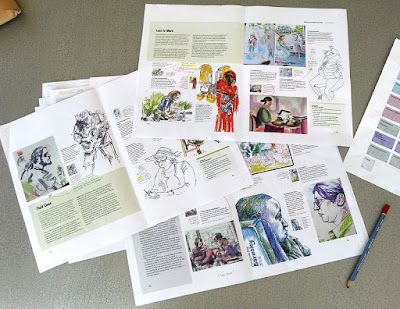 Organising all my ideas was probably the biggest challenge and that is behind me now. All the text has been created to fit within specific chapters, each of which is subdivided into spreads - remember the Flat Plan? I have never worked in that way before and it has been interesting to watch how the plan has evolved as we've gone along. We are onto our 4th Flat Plan now.

About half of my text was generated by that process of organising my ideas, the rest revolves around specific sketches, selected from my archive of sketchbooks or from guest artists, chosen to help underline particular teaching points in the plan. Those decisions have been mine, but made with the advise and guidance of the editorial team at Quarto. As with any publishing project, it is far more of a team effort than it appears from the outside.

The bit where the rest of the team have really come into their own though, is with the design. I have written my text and chosen my sketches, spread by spread, concentrating on informative content, rather than how it will look. Now all that has to be organised visually, placed on the page in a way which is both clear and (hopefully) gorgeous to look at.

The sketches in these layouts are still using mostly my quickie photos by the way, which is why they are horribly grey. The gleamy, high res scans will be dropped in next, which will look better still: 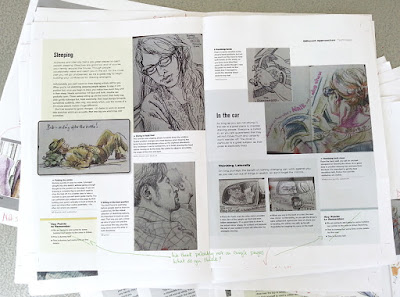 A batch of initial layouts, for a small section of the book, came through back in March, but my team at Quarto are working on many more books at once than I am used to with picture books, so there has been quite a long gap, where I have been waiting my turn. Now though, things are really motoring.

This new batch is about a third of the book. I went through them last week, adding notations for changes, then we talked it all through on the phone. 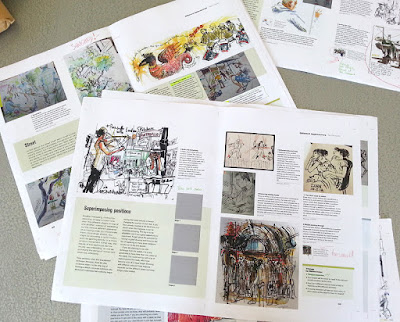 You can see from the layout above, that sometimes there are greyed-out areas, where images are to be dropped it later. That's because I have yet to do the filmed sections. Yes... filmed! It's all a tad daunting: I will be filmed in action, then stills will be taken from the film, to use as step-by-step illustrations, in sections like the Colour Before Line step by step I showed you a while ago. Sometimes that's the only way to create something in stages: as with the section above, which is about drawing motion.

Anyway, still some bits to work on as a result of these layouts, so better get on.

I really look forward to buy your book ! I like very much your style :-)

Looking good so far, Lynne! Can't wait to see it :)

Sounds like it's working a bit differently to mine. Mind you I had to work with the numbering for 365 tips so that was quite a constraint! ;)

I can't imagine changing the flat plan as you go - but I suppose I did the same thing. It's getting the structure right in terms of themes and points and images which relate which is the tricky bit.

Are you finding everything just takes so much more time than you thought?

I'm looking forward to have it :) When can we see it in de bookshops?
Suzana

Suzana - I don't have an exact publication date yet, but it is late October / early November. The UK edition will be published with Search Press; the US edition is with Barrons. Keep an eye on the blog though - I won't let anyone miss it :-D

Katherine - The flat plan evolved as I wrote the text: certain sections made more sense in other chapters. Some needed an extra spread, as I discovered more teaching points when I selected the sketches. One spread I chopped, when I realised I had less to say about the subject than I had thought.

I think the bit which took the most time was the selection from the archive, though I knew that would be a logistical nightmare, so at least no surprises. The scanning, which I expected to be a monstrously long task, actually wasn't so bad. The writing itself has flowed very easily. My biggest problem is the step-by-steps, as I just don't work that way!

Really nice book i like it after the read because its give us good information about child thanks for share it statement of purpose writing services .