Though I was in Brazil for 10 days, the actual symposium in Paraty ran for 3 days, each of which was crammed with workshops, demonstrations, talks and SketchCrawls, not to mention all the extra-curricula drawing through lunch and dinner.

I was teaching a full day on Thursday and on Saturday morning, but the rest of the time I got to take part in whatever was happening.

There was so much to choose from and of course lots of things clashed, but I had a go at everything I could fit in, trying to squeeze every last drop out of the precious time.

All the instructors were teaching through most of the workshop slots, which meant that we were only able to opt to take part in one workshop being given by a fellow instructor. It was so hard to choose, but in the end I went for something totally different to my approach, so I would learn something new, I chose Paul Heaston.

Paul usually works with a fine-liner and does mostly very small, very intricate drawings, which are incredibly beautiful and very cleverly put together. One device he uses is a fish-eye lens perspective, to try and squeeze everything which is in his field of vision into his tiny A6 sketchbook. I'd never met him before, as this symposium was his first time.  Turns out he's lovely as well as brilliant, and very funny. Excellent combo.

I tried my best to learn how to draw the fish-eye style. It was so much harder than I thought! Paul asked us to start with thumbnails and I discovered to my surprise that doing a thumbnail of a view was, for me, the most difficult of all! My thumbnails all kept growing and growing...
After a few pathetic dry-runs I did one final sketch which worked, more or less. Here is Paul trying to whip me into shape: 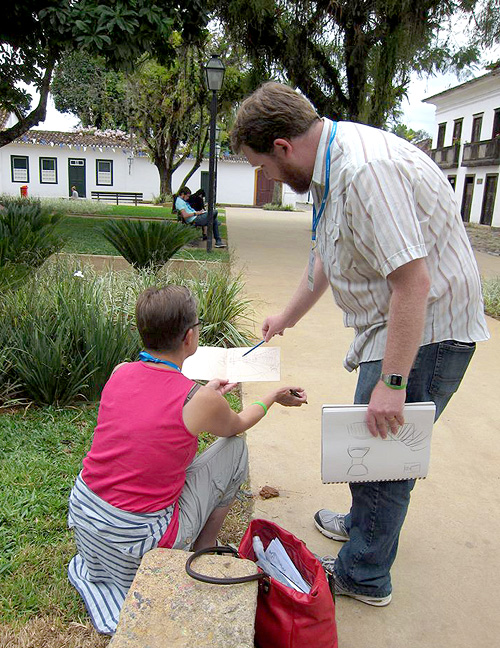 I went to a couple of excellent lectures, one about the nature of learning, by my new friend Matthew Brehm, and one by Karina Kuschnir from Rio, about gathering research information through sketching, which was very pertinent to the work I am hoping to do with Manchester University.

I did one evening event with Richard Alomar, about sketch-mapping. He asked us to create a concertina record of a walk down one street, taking note of anything which snagged our attention. It was amazing - I had walked down the same street many, many times while we were there, and thought it very much like all the others; I only really got to know it through Richard's session:

On the last afternoon of the symposium, there was a new feature: the Big Crit, where we instructors gave one-to-one feedback on people's work. It was arranged like speed-dating with just 5 minutes per person (although it did stretch at the end, as the crowds thinned). Everyone said it was very useful, so I think it is likely to become a regular feature. 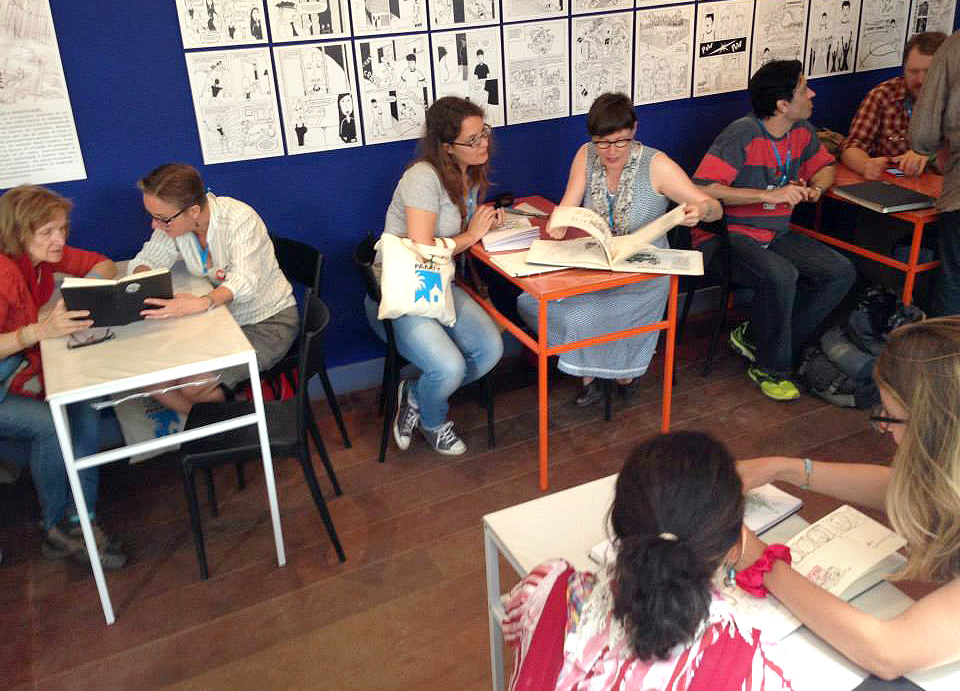 Straight after this, we had a huge SketchCrawl for all 240 Urban Sketchers, plus any locals who wanted to join in. We gathered together for a group photo then all sketched together in the square until the light was completely gone. 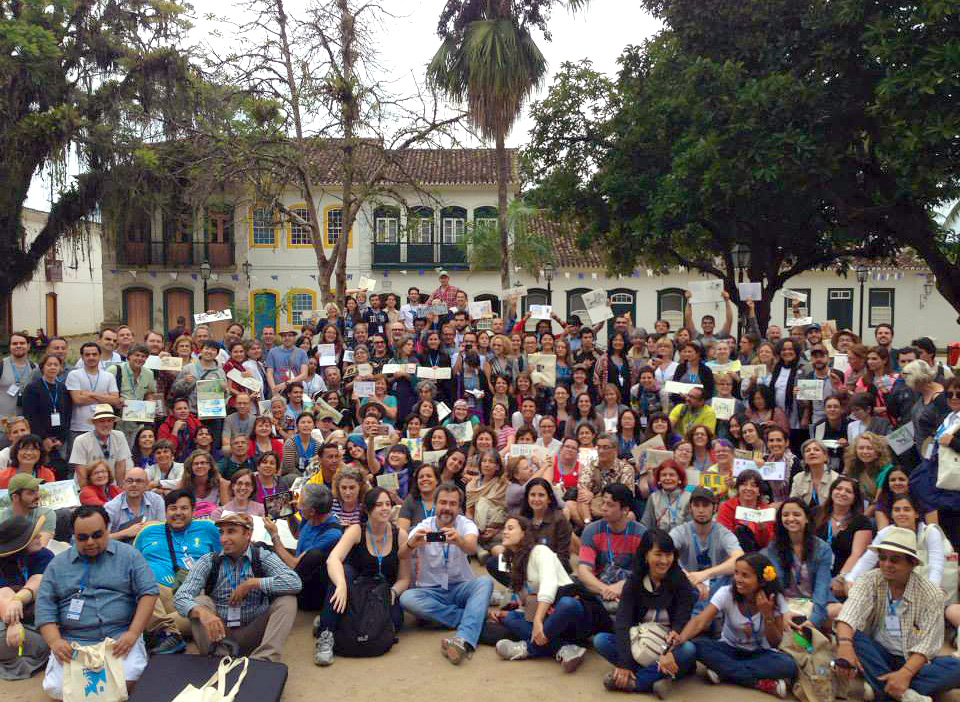 That evening we held a blind auction. Each of the instructors (and some other sketchers too) created a piece of work during the symposium, to be auctioned in aid of next year's symposium fund. I found it quite stressful to do, as I left it until the last minute and had to be sure to do something good enough during the final sketchcrawl. Fortunately it worked okay. This is my piece and the lovely Nelson Paciencia, who bought it: 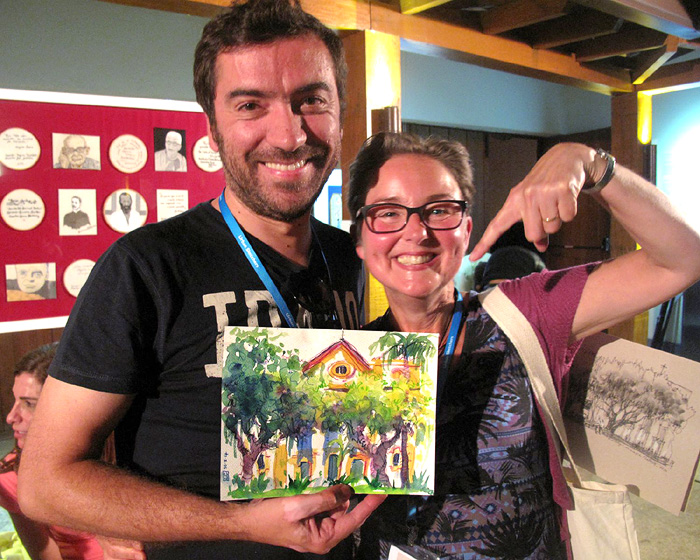 Then we celebrated with the end-of-symposium party. It's normally reasonably formal, with speeches, but this was Brazil. The locals started dancing fairly early on. Well, it would have been rude not to join in... 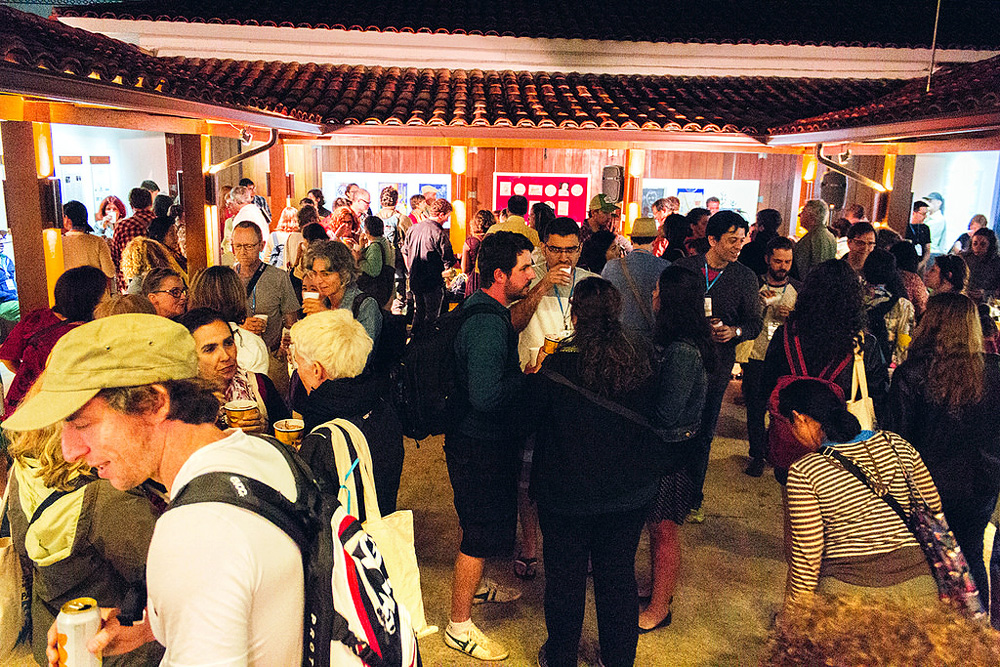 We ended up doing a massive conga (in quite a small space - fun in itself). After that, it was impossible to go back to anything formal, so we just kept partying instead! 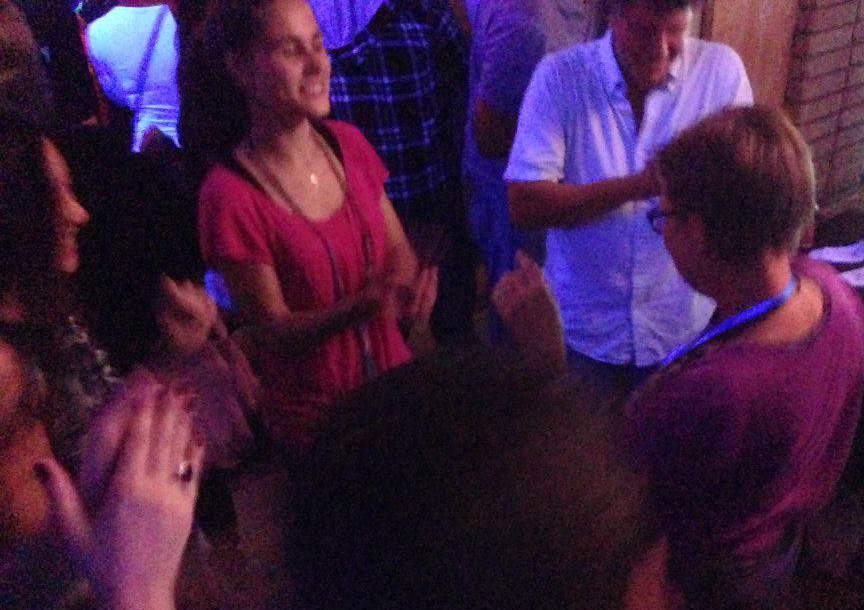 Later that evening, like each of those before it, a smaller group of us went on to the local music bar, Paraty 33, where we drank Caipirinhas (way too nice) and carried on drawing and bopping into the small hours. I was of course amongst the last small knot of hardened boppers who finally crawled out at 4.30am.

I can't remember the last time I had so much fun. After several days of intensive sketching and partying, I was of course exhausted, but couldn't have been happier when every day we got up and started all over again!

I hope to get there next year and would love to attend a session by you. I'm saving my pennies to go wherever it turns out to be. Your blog is amazing. Gonna try sketch mapping today.

Looking back to your pictures, i realize how lucky I was to attend (my first time) to this remarcable simposium. The drawing you did for the auction was so powerfull, that turns impossible for me not to struglle to have it.
See you next year!

Thanks so much guys.

I'm so pleased you bought my painting Nelson and so pleased too that I managed to do something worthy of your money, despite the pressure :-) Really glad your first experience of a symposium was so positive.

You have definitely got to do your best to get there Lee - it's like nothing else. So intense, so inspiring!

(Sue shared this on Google Plus. I meant to say Wow Lynne!)