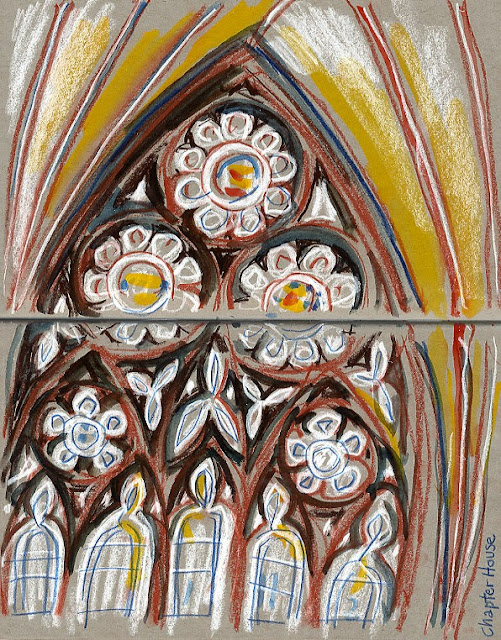 Well, that was brilliant!

Ever since I visited the Minster in July, to stake it out and plan our day of sketching for The Big Draw, I have been really looking forward to SketchCrawl North's special York Minster SketchCrawl and, when it finally arrived on Saturday, I wasn't disappointed. 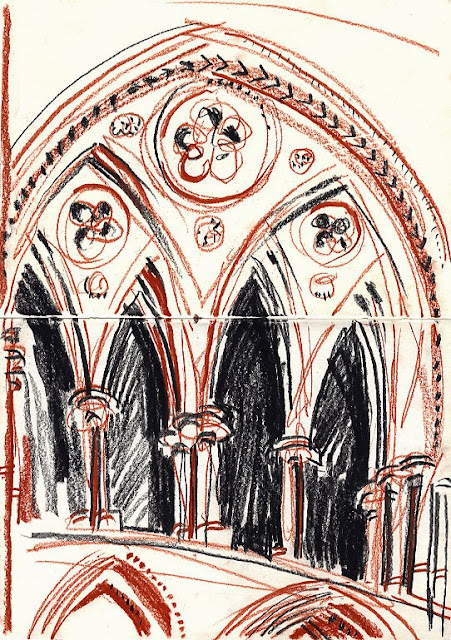 We had the best turn-out I think SketchCrawl North has ever had: there must have easily been 40 people, including at least half a dozen newbies (including one mum and her 10 year old daughter who had never ever sketched before). We even had one author who came to do on-the-spot writing instead of sketching. 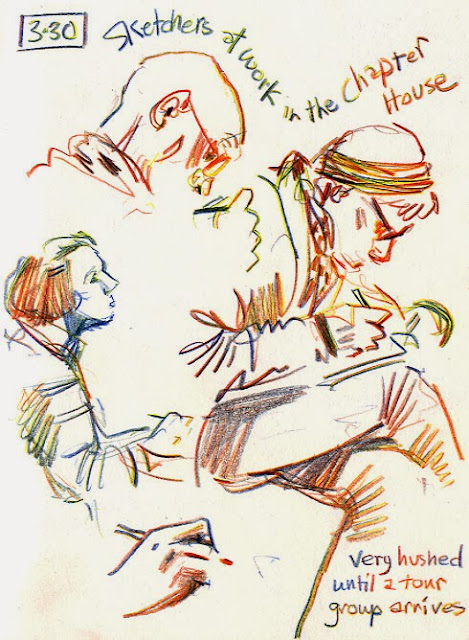 Even in the massive space of the Minster, we made our presence known - there were people drawing like demons everywhere you looked (or maybe drawing like angels?). 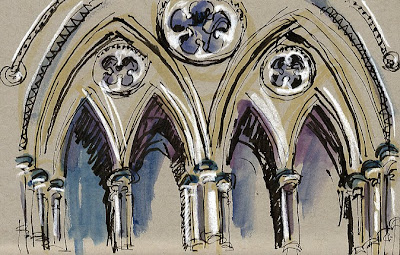 These are my sketches from the day. I took lots of different media with me, as I felt in the mood for experimentation. The sketches on the grey paper, like the one at the top and immediately above, were done in a brand new Strathmore sketchbook, one I was given during my time at the Urban Sketchers symposium in the summer (you get so many excellent freebies). As you see, I also used my crazy rainbow pencil from Barcelona: 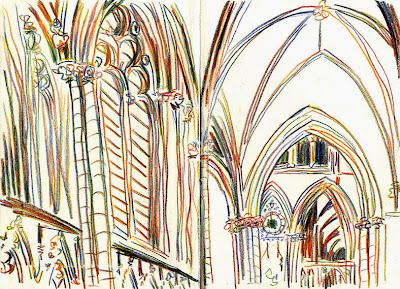 The day was divided into roughly 50 minute stints: because the space was so overwhelming, we decided to choose smaller areas to tackle, one at a time, and so moved as a group through the different parts of the Minster, stopping first in the nave above, then the Quire, then the two transepts, then finally the Chapter House. 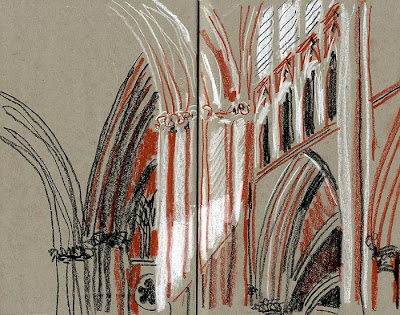 In the afternoon, there was a wedding. We got to draw to the accompaniment of some of my favourite hymns played on the magnificent Minster organ (wow, those low notes: like earthquakes!). I couldn't resist singing along, but luckily the organ was so powerful, only someone sitting right next to me would have been able to hear (sorry Colleen). 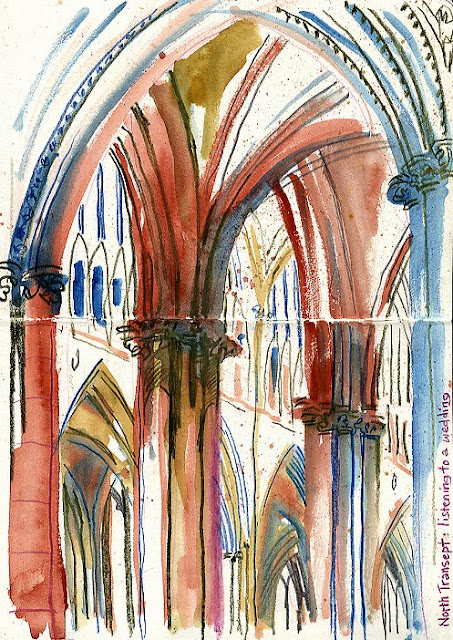 I managed a lightening sketch of the bride and groom as they walked out through the south transept. How amazing to be married somewhere so grand: 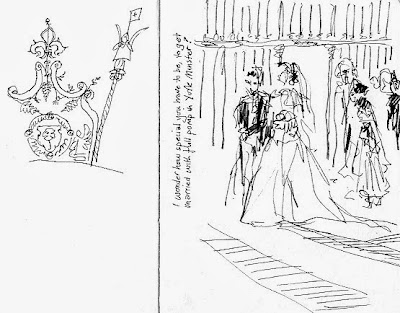 At the end of the afternoon, we used the Minster's education room for the sharing. There were so many of us with so many sketchbooks to look at, we had to push together about 8 tables and create two long runs across the room to lay everything out. Then we all stood round and had a good look, slowly working our way round the tables.

We finished at 4.15, when most people drifted off, but a few of us went to the cafe next door for well-deserved cake! 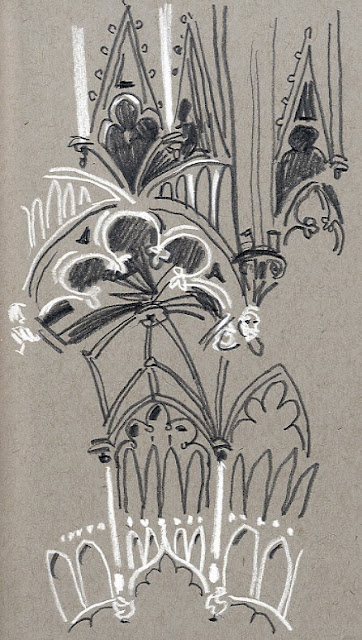 Thanks so much to the team at the Minster, especially to Helen, for helping sort all the organisation, booking us a room for lunch / sketchbook sharing and generally making at all possible. 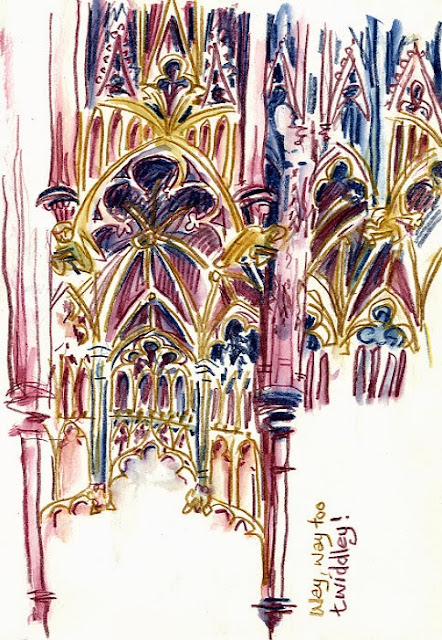 There are, as always, lots of fabulous sketches you can see, by some of the other people who were there. They will post them onto the SketchCrawl North Facebook page over the next week. We are going to try and load as many as possible on to the Minster website too. 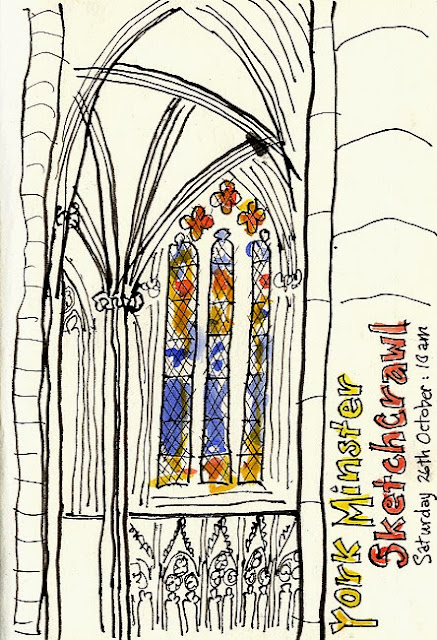 If you would like to be on the SketchCrawl North mailing list, all you need to do is drop me an email. It's all free, it happens once a month and it is always great fun.

Gorgeous...both the sketches and the subject!

wow amazing sketched Lynn. Sounds and looks like a fabulous Big Draw sketching event! I really like the sketches on grey.

Tremendous sketching! Brings back memories of summer before last, when my wife and I happened to be in York on the 800th anniversary of its founding as a city. We attended Evensong at York Minster, one of the true highlights of our trip to England. That organ is amazing. And the minster is so beautiful. Thanks for doing such a wonderful job of drawing it.

Wow!!!
I very much enjoyed reading through this post and viewing the wonderful sketches.

Lovely sketches! I was sorry to miss such a great day. Glad you got to the tea-shop afterwards, as I think that's a perfect end to any good trip! Carol O