This time last week, I was on the east coast, celebrating my birthday with good friends. 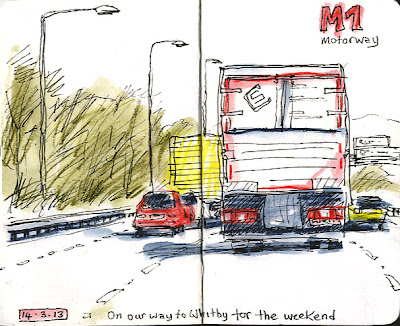 The coastal area around Robin Hood's Bay and Whitby is one of my favourite places and somewhere John and I return to again and again. We got engaged at Robin Hood's Bay and so started our honeymoon there too. Unbelievably, that was 20 years ago this summer, which makes me feel really rather old!

This time, we rented a lighthouse cottage, high on top of the crumbling cliffs above Whitby. Very dramatic: 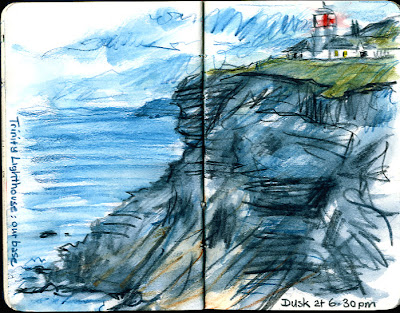 Given the time of year, we were pretty lucky with the weather, though it did rain on me while I was out painting this view of the cliff. I had to stop as it got heavier, but I rather like the speckle-effect:

We mainly pottered about on the beach, as recently melted snow made it too muddy to walk along the coastal path. The boys had fun hunting fossils - there are loads to be found in that area: 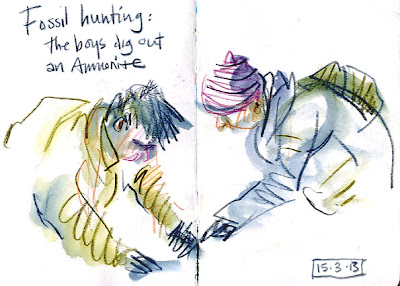 I mainly hung behind, drawing and painting the cliffs and the sea.

I just love the patterns and colours you can pull out of the rocks, the water and the sky:

It was all over way too quickly. But isn't that always the case when yiu are having fun?

I have enjoyed your bold approach to laying down color. It has inspired me to experiment in that direction as well. I have been getting your posts now for several months and they have helped me understand the professional side of this business better. First and foremost - constantly plugging away at the art. I majored in it back in 81-85 but went from there to the US Army. My style(and my hangup) is in the detail work. But being an Urban Sketcher has loosened me up quite a bit. I will not be able to see you at the Symposium since I can't afford to go. But I hope to develope an on going conversation with you about the business. If you want to see my work I am at mpgraphicillustration.blogspot.com

Hi - so pleased to be helping to inspire you. I'm pleased too that you are finding the blog posts informative.

Yes, I too fight with staying loose: I think it is a common problem. I tend to choose approaches that limit how tight I can be.

Sorry you can't make it to the symposium. Good luck with your work!

Happy birthday to you, Hope it was a good one.love the colours used in your work.my favorite is your sketch of robin hoods bay and the car and lorry captured brilliantly.

Happy birthday to you, Hope it was a good one.love the colours used in your work.my favorite is your sketch of robin hoods bay and the car and lorry captured brilliantly.

Hi Lynne,
I just need to say that I absolutely love your work. I mainly paint in oils, but are starting to venture into illustrating for children's books, and I am learning so much from you. Thanks for all the info on your website, videos and blog.
All the best. Marietjie du Toit from Cape Town, South Africa