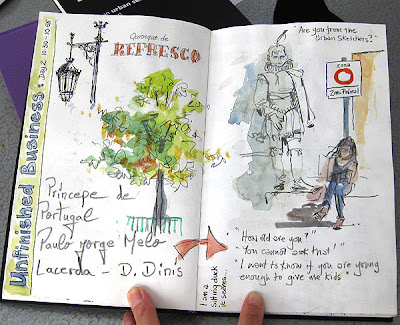 I'm afraid I am too excited about the great time I had in Lisbon to wait for my scanner to be fixed so I have taken photographs of my sketchbooks instead, which has worked surprisingly well. 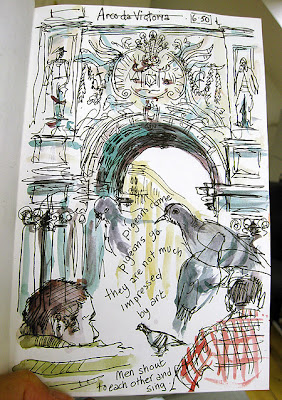 One of the things that was really fun about the symposium was that people hardly ever stopped drawing. 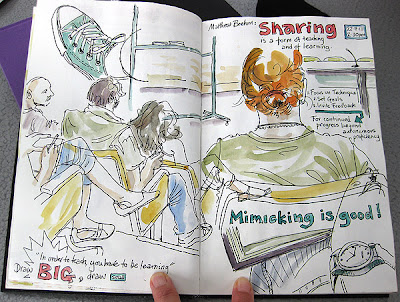 Every day there were a couple of lectures during the afternoon, in between our workshops. They were inspirational stuff and you might think folks would have used the time to rest their drawing arms, but no - we all carried on, drawing the lecture theatre, the speakers and each other! 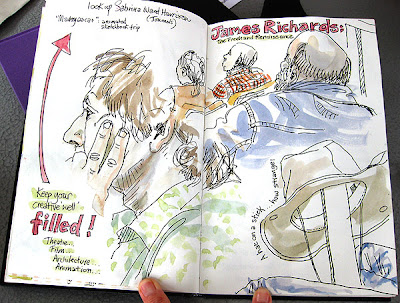 As you can see, I even got out my watercolours in the auditorium, and I was far from the only one.

I also experimented a lot with using watercolours in a quite different way, something I picked up from my first workshop with Richard Camara: putting the colour down first, in a very casual, sometines almost arbitrary manner, then working line in afterwards, like this 10 minute quickie: 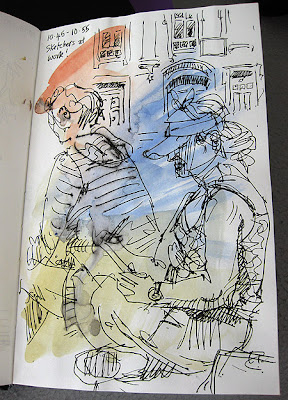 We drew each other at dinner, we drew our dinner... we were, frankly, a little obsessive. John and I were stying in quite a fancy hotel (he got us a deal) and I suspect it was the 1st time anyone had got paints out at breakfast - I was very carefully not to plip on the linen! 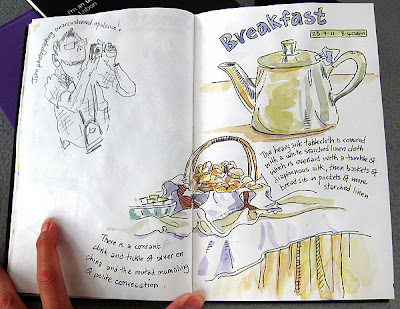 At the end of the symposium, there was a SketchCrawl, where the public were also invited to take part. It was brilliant to see 100s of people, dotted all round the massive Praca do Comercio, all sketching away together. We took a group photo at the end (you can just see me top left): 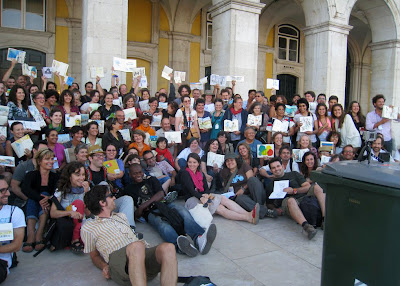 This is one of the sketches I did during the SketchCrawl, again, putting down the colour first and then adding the ink once it was dry: 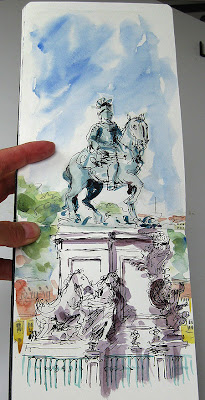 I have loaded all my photographs, and the sketches I have snapped or scanned thus far, into a special Flickr account, if you are interested to see more. 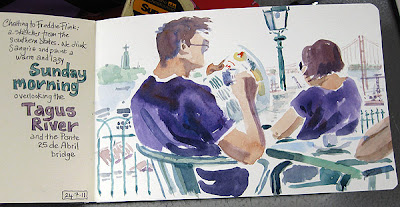 Lynne I am like an addict when I see sketchbooks. I have to check it out. I don't know what it is but I love them. I carry one were ever I go now and love looking back on so many doodles and observations recorded and forgotten over time. I have precious sketches of my grown up kiddies when they were younger watching T.V. Then there is painting holiday memories and random creative characters that evolved by mistake just from picking up a pencil and scribbling. Is it the love of book that appeals to us or the raw lines and scribbles? I don't know but I do now they are treasures.

The age of scrapbooking really opened up more people to art with collage and sketching too this is marvellous. People who wouldn’t call themselves as illustrators or artists soon found that creative being inside and had a ball with it. Thanks for the peek.

I love these. You have such wonderful talent! Thanks for sharing.

Great works I've been there and I can remember your face. Great days!

I have loved looking through your sketchbooks - they are fantastic and inspiring. Many thanks, Charlotte x

Thanks folks! And nice to 'meet' you again hfm: I can't wait until next year. Just hoping it's not too far away next time!