Wow - That Was Fun: Sketchcrawl No.1!


What a fantastic day we had on our very first Sheffield Sketchcrawl! 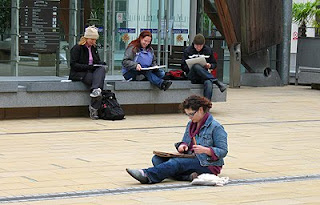 I didn't know what to expect. Despite all the press coverage in the Telegraph, Gazette and Star (thanks guys) and the emails that have been coming in, as I took the bus into town on Sunday morning, I was thinking perhaps people might change their minds when it came to it... 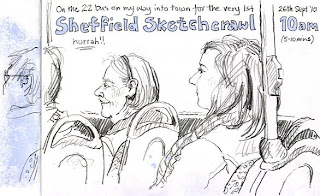 But I needn't have worried: we had at least 25 people turn up and most of them stayed the whole day. There was a complete spread of abilities and ages too, and a good mix of guys and girls. Perfect. 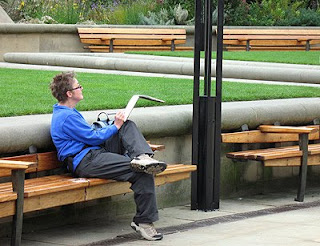 First stop: the Peace Gardens from where you can see the old town hall. Above is me working on the watercolour and pen sketch below: 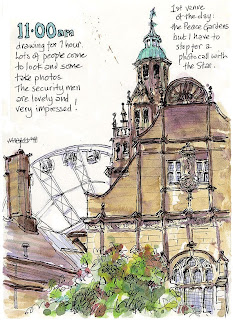 The weather was pretty kind and it didn't rain at all, but we started to get quite chilly and were icy-fingered by the time we left the Peace Gardens for the refuge of the indoor Winter Gardens: 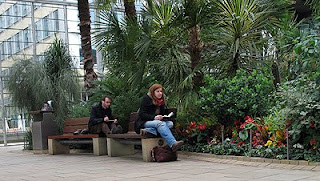 Everyone drew constantly, even the beginners, who stuck at it and did really well, especially since some of the settings were not the easiest things to tackle. 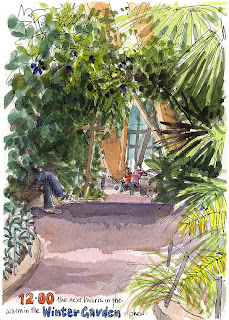 As well as meeting all these lovely new people, I really enjoyed the fact that passers-by kept coming up to ask us about what we were doing, and to look at the drawings. I had my photo taken with someone's girlfriend and also with the security man (who was very impressed!). 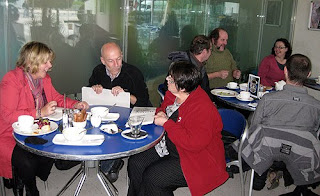 We had a break for lunch at the Millennium Gallery cafe and then we had an hour in the wonderfully cosy warmth of the galleries themselves. There was one show all about the history of tea, with a 'teacups on sticks' sculpture: 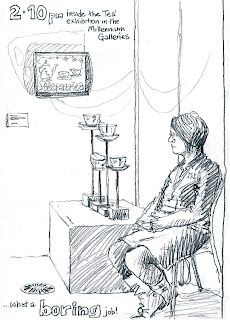 Then I drew the much-loved kinetic sculptures in the outer gallery, created from Sheffield cutlery. It was hard-going, as a teenager, chatting up a girl on the bench next to me, was joggling his legs violently up and down the whole time! 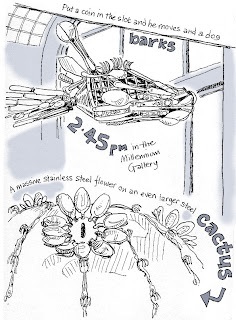 The final stop was a bit of a killer: back into the cold, to draw the area around The Hubs, with a fair old wind whipping round our pencils.

I was glad of my vest and my two jackets (super-sensible or what?). 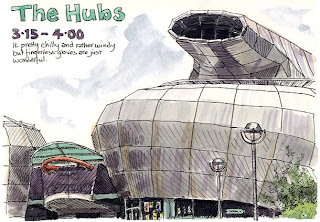 At 4 o'clock, there was a surprisingly dignified scurry for the pub, to thaw out. I got very over-excited looking at everyone's sketchbooks - such a treat. It's so interesting to see how differently people interpret the same thing. 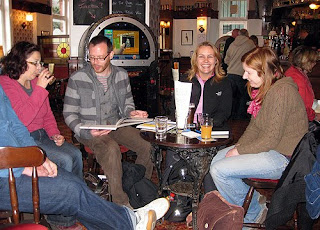 The sketches above are mine, but do take a look at the Sketchcrawl Gallery where you can see what other people came up with. There are tons more photos of us all in action there too.

A big 'thank you' to everyone who came along. If you would like to take part in the next Sketchcrawl on October 16th (don't worry: it'll be indoors) let me know and I'll keep you posted. 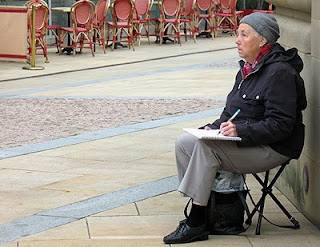 You can see more Sketchcrawl drawings from all over the world at sketchcrawl.com - the official Sketchcrawl website.

That looks like loads of fun! Glad you all had a nice time :)

this sounds such fun - a bit daunting but fun nonetheless! i wish i could have come along with sian but i'm miles away sadly. so lovely being able to see the photos though :)

It was a very fun day. Thank you Lynne for organising it all.

S'not fair! I wanted to go but bottled it 'cos I thought everyone would know everyone except me! Can I come on the next one? I'm in Liverpool so it's do-able.

We will forgive you your sillyness Katie and let you come next time! If you're not already on the mailing list, send me an email and I'll keep you up to date. x

Thank you for sharing
This fabulous work with us
Good creations