Good news: at last, my voice has returned!! After 4 days of complete silence and a further 2 of sounding like an alien with a voice box, things are finally back to normal (or as normal as it gets).

To celebrate I'd like to offer you a sip of Champers, but instead, you'll have to make do with the final installment on the digital work for Bears on the Stairs... 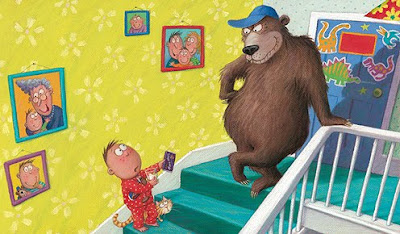 You can never include any words on picture book artwork, because the book might need translating for foreign editions, so it's always done afterwards on a separate layer. Spot the blank red sign on the boy's bedroom door above.

On this detail from the rough, you can see what it will read when finished: 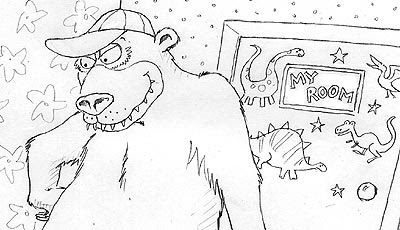 Usually this wording is dropped in by the designer, when they do the regular text, but I like to mock up the pastel effect, to give the impression that the words have been done on the actual drawing, otherwise they can appear to 'float' above the illustration.

I scanned a sample of my textured pastel paper into the computer to create an identical 'virtual' paper. I can then draw onto this, in 'virtual pastels', using Corel Painter, and get the exact same texture as the original drawing:

As a guide, I paste the wording from my rough (above) onto a section from the artwork scan, then I write over it in my virtual pastel (on a seperate layer so it can be lifted off). This is what the overlay wording looks like on its own: 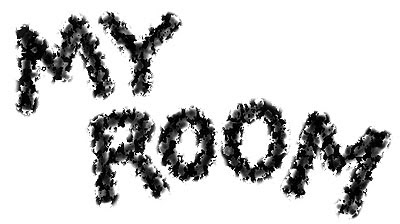 This can then be printed over the artwork on the English language version only, allowing for any number of translations to be inserted with impunity. Sneaky stuff eh?

Great Lynne. I will remember that in my next art work. Daisy

I would never have thought of doing it like that. does coral have a good 'pencil' tool too?

Oooh, that IS interesting! I have been asked to include text before in a Gaelic book, so I didn't know this! I've just done quite detailed roughs for a book of my own (with text!) so that's been a big help, ta!

Yes Cass - I find Corel Painter by far the best for different kinds of markmaking, rather than the very limited brushes available in Photoshop and Illustrator (last time I looked anyway). Painter has a truly vast range of 'brushes', including all different kinds of pencil, paint, charcoal, pen - you name it really!

And you can draw on a massive range of paper textures, or scan in your own.

You're welcome Veronica - bear in mind too that the text overlay needs to be in black too, so don't design anything that requires coloured wording.